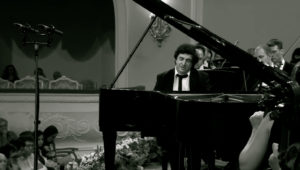 Hailed for his emotional intensity, bold energy and remarkable levels of color, Sergei Babayan brings a deep understanding and insight to a stylistically diverse repertoire, which includes a performance history of 54 concertos. Le Figaro has praised his “unequaled touch, perfectly harmonious phrasing and breathtaking virtuosity.”

Highlights of the 2015/2016 season include concerto performances with the Rotterdam Philharmonic conducted by Valery Gergiev and with the Camerata Israel in Tel Aviv; performances at the Edinburgh Festival in Scotland, and at Bad Kissengen, Germany; recital and concerto performances in duo with Daniil Trifonov at the Mariinsky Theater in St. Petersburg, Russia,; a return to Wigmore Hall in London; recitals and chamber music performances in Los Angeles; Atlanta; East Lansing, Michigan; and Columbia, South Carolina, among others.

In  the 2014/2015 season, Mr. Babayan’s schedule included performances in Lugano with Martha Argerich; a return to the Verbier Festival, where he debuted in July 2014; and performances in London at Wigmore Hall.  Of special note was his BBC Proms performance of two Prokofiev piano concertos, numbers 2 and 5, at Royal Albert Hall with the London Symphony Orchestra and Valery Gergiev.

Mr. Babayan is a frequent guest at music festivals in Europe and the US. In July 2013, he was invited by Martha Argerich to her festival “Progetto Martha Argerich” in Lugano, Switzerland. The two artists performed a newly created cycle of transcriptions for two pianos by Babayan from Prokofiev’s “Romeo and Juliet”.  The concert was broadcast live, and  Ms. Argerich invited Mr. Babayan to perform the transcription with her again at the Klavier-Festival in Ruhr, Germany.

Babayan has collaborated with such conductors as Yuri Temirkanov, Neeme Jarvi, Hans Graf, David Robertson, Tugan Sokhiev, and Kazimierz Kord, among others.  Since 2006, Babayan has performed with Valery Gergiev numerous times to great critical acclaim, including appearances at the International Festival “Stars of  the White Nights”, the Moscow Easter Festival, the Barbican with Mo. Gergiev conducting the London Symphony Orchestra, in St. Petersburg’s Mariinsky Theatre, the Great Hall of the Moscow Conservatory, Théâtre des Champs-Elyseés in Paris, at the Salzburg Festival, and at the Rotterdam Philharmonic-Gergiev Festival where Babayan was artist-in-residence.

His engagements and tours have brought him to preeminent international concert venues including Salle Gaveau in Paris, Wigmore Hall in London, Carnegie Hall in New York, the Warsaw Philharmonic, Severance Hall in Cleveland, Mariinsky Theatre in St.Petersburg, Herkulessaal in Munich, Liederhalle in Stuttgart, Meistersingerhalle in Nurnberg, Konzerthaus in Berlin, Brahms-Saal in Karlsruhe, Beethovenhalle in Bonn, Philharmonie Hall in Essen, Rudolfinum-Dvorak Hall in Prague, Victora Hall in Geneva in and many others.

Highlights include Beethoven’s Symphony No. 9, world premieres by Wabanaki music-keeper Firefly and Grammy Award-winner Kenneth Fuchs, and return of The Nutcracker Bangor, Maine — The Bangor Symphony Orchestra announced an ambitious slate of programs for its 2022-2023 season on Monday as the organization continues to chart a course through the Covid-19 pandemic. Music Director and […]

BSO Joins 4th of July On the Waterfront