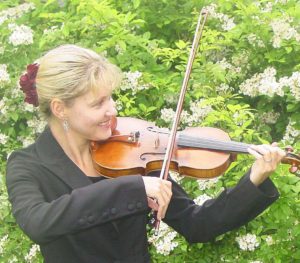 Sascha Zaburdaeva Lorimer is a Russian born musician whose heart belongs to America. Mrs. Lorimer has become a prominent performer and conductor throughout Maine.  She conducts the Bangor Symphony Youth Orchestras, sits first violin in the Bangor Symphony Orchestra, holds the concertmaster position in the Colby College Symphony, regularly performs chamber music and is a veteran teacher of violin/viola at RDL Strings in Bangor.

Mrs. Lorimer got her first bachelor’s degree in violin performance, teaching, and orchestral playing from one of  Russia’s  most prestigious music schools, the Gnesin’s College of Music in Moscow. Following her heart, she continued her music adventures in New York where she studied under Masao Kawasaki and Itzhak Perlman. After getting a second bachelor’s degree in violin performance Sascha moved to Maine to finish her graduate studies with Anatole Wieck.

She immediately applied her passion to music here in Maine, co-founding the MSYM summer string program at the University of Maine with Dr. Wieck. Finding mentorship and support, she conducts the MSYM string orchestra and works energetically to assure that music plays a vital role in securing a peaceful and bright future for our children. Mrs. Lorimer resides in Bangor, the best place on earth, with her husband Robert Lorimer, owner of RDL Strings/Fine Violins. 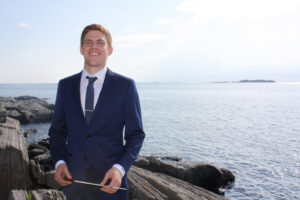 As a composer, Richmond has written five symphonies, four ballets, three string quartets, and scores of other works ranging from solo to large ensemble. Recently, his work “Delirium,” for violin and electronics, was choreographed by members of the New York City Ballet.

As an audio engineer, Richmond has worked with the Waterville Opera House, the University of Chicago, North Park University, and has gigged with multiple Grammy award winning popular music and classical music acts.

Anna Clement, has maintained a private violin studio throughout her career and has spent the past ten years as a public school orchestra director in New York, Texas, and Washington.

Anna graduated from Nazareth College of Rochester in 2010 with a Bachelor of Music degree in Music Education. In 2015 she completed her Master of Music in Education degree from Indiana University’s the Jacobs School of Music where she studied violin and string pedagogy with Dr. Brenda Brenner and Mimi Zweig.

Bangor, ME — The Toronto Star calls violinist Blake Pouliot “one of those special talents that comes along once in a lifetime”, and on Sunday, January 29th he takes center stage with the Bangor Symphony Orchestra. Performing Mendelssohn’s Violin Concerto in E minor, Op. 64, the young Canadian violinist will be making his Bangor debut […]

Rockland, ME – The Ellis-Beauregard Foundation is pleased to announce that Nathan Shields has received its 4th annual Composer Award.  With the Award of $25,000, Shields has been commissioned to create a new work to be performed by the Bangor Symphony Orchestra in 2024. Shields was chosen from 376 applicants by a jury including composers […]