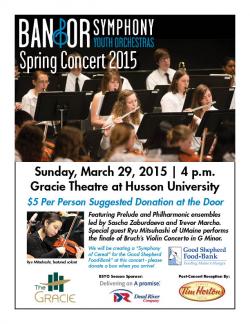 Bangor, ME – The Bangor Symphony Youth Orchestras (BSYO) will present their spring concert on Sunday, March 29th at 4 p.m. at Husson University’s Gracie Theatre. The concert will feature performances by the Prelude String Orchestra, the Prelude Wind Ensemble, and the Philharmonic Orchestra, led by conductors Sascha Zaburdaeva and Trevor Marcho.

The March 29th concert will conclude the BSYO’s 2014-15 season, which saw membership rise to over 100 young musicians from across Central Maine. Sunday’s program will include a range of works and features violin soloist Ryu Mitsuhashi, a UMaine graduate student, performing the Finale of Bruch’s Concerto for Violin in G Minor with the Philharmonic Orchestra.

The BSYO’s 2014-15 season sponsor is the Dead River Company. Reflecting on Dead River Company’s long tradition of supporting the Bangor Symphony Orchestra and Youth Orchestras, company president Robert Moore said, “The arts make an immeasurable contribution to quality of life and Dead River believes in supporting organizations that have an educational component, such as the youth orchestras. Not only do the students learn music, they learn confidence and skills that will stay with them the rest of their lives. We are happy to support that. It all comes down to the company motto — delivering on a promise.”

Doors will open at 3:30 p.m. A donation of $5/person is encouraged upon admission. Following the concert, there will be a reception in the lobby, compliments of Marc and Andrea Nicknair, Tim Hortons 305 Odlin Road and 444 Main Street, Bangor. Information at bangorsymphony.org/bsyo.