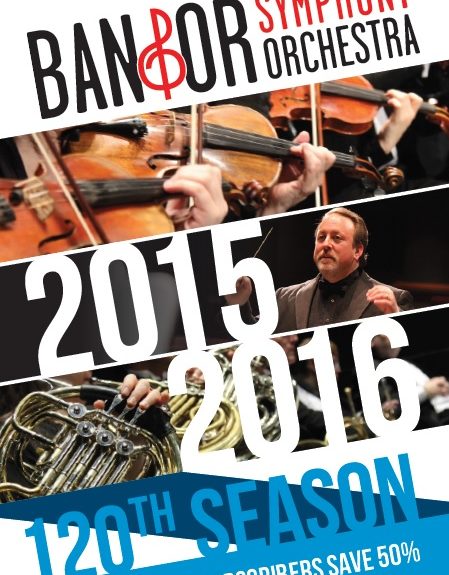 Bangor, ME – The Bangor Symphony Orchestra announced plans for its 120th Season yesterday. Helmed by Grammy Award-winning conductor Lucas Richman, the BSO will make its first foray into opera with a semi-staged 120th anniversary production of Puccini’s La Bohème in April 2016, anchoring a season that will include the Maine premiere of Richman’s own Concerto for Piano and Orchestra: In Truth as well as performances of popular and lesser-known works by composers from Schubert to Stravinsky.

Acclaimed guest artists from around the country will be joining the BSO throughout the season, beginning with pianist Jeffrey Biegel on September 27th. Biegel, a prolific recording artist and champion of new piano music, will perform Lucas Richman’s Concerto for Piano and Orchestra: In Truth, which was written for him by the BSO Music Director and Conductor and recently recorded by the Pittsburgh Symphony Orchestra for a forthcoming release on Albany Records. On November 22nd, the BSO will be joined by celebrated young violinist Elena Urioste. Ms. Urioste, a winner of the Sphinx Competition, recently made her Chicago Symphony Orchestra debut and was selected as a BBC New Generation Artist. She will be performing Beethoven’s Violin Concerto in D major with the BSO.

On January 24, 2016, trumpeter George Vosburgh will be featured in Hummel’s Concerto for Trumpet in E major. A passionate educator and performer, Vosburgh is currently the principal trumpet of the Pittsburgh Symphony Orchestra. Hailed as “first class” by Gramophone Magazine, cellist Inbal Segev will be featured in Tchaikovsky’s Variations on a Rococo Theme on March 6, 2016. Having made her Berlin Philharmonic debut under Zubin Mehta at age 17, Ms. Segev is a celebrated soloist around the world.

The BSO’s 2015-2016 Masterworks season will conclude with Puccini’s La Bohème on April 24, 2016.  The opera and the BSO both made their debuts in 1896. A first for the BSO, this semi-staged production will feature the orchestra on stage with a full cast, evocative costumes and props, and projected translations to bring this classic tale of love and loss in 19th century Paris to life. In the starring roles of Mimi and Rodolfo are soprano Emily Birsan and tenor John Bellemer. Ms. Birsan, recently featured on the cover ofClassical Singer magazine, is a noted rising star in the opera world, having just completed three seasons at the Ryan Center of the Lyric Opera of Chicago. Mr. Bellemer has credits at leading opera companies around the world, and has recently been seen at the Boston Lyric Opera. The production will be directed by stage and screen director and actor Loren Lester, and will also feature bass-baritone Eric Mihan, owner of the Bangor Wine and Cheese Company, in the supporting role of Colline.

The BSO’s annual Pops presentation will offer a date-night opportunity for symphony-goers on Saturday, February, 13, 2016 with An Evening of Romance with Noel Paul Stookey. The famed folk singer of Peter, Paul and Mary will bring to life new and favorite works backed by the BSO. On December 19th and 20th, The Nutcracker returns to the Collins Center when the BSO and Robinson Ballet partner to once again bring holiday magic to families across the region.

A complete listing of the season and all programs may be found below.